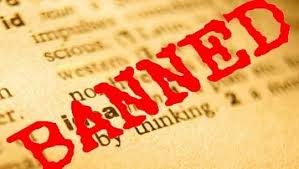 I often sky write these days, trace letters in the shapes of twigs and branches, see what words they form.  It is a hobby, one I practise in secret.  I keep myself to myself since the edict went out banning our language from being written – or even worse – read.  We are only allowed to listen to the Scholars.  Theirs is the only message that carries truth, they say.

When the world ended the first time, it was because of religion based on words in a book.  Words misinterpreted by many.

When the world ended the second time, it was because of weapons triggered by an exchange of words.  Words misinterpreted by many.

The world will not end a third time, they say, because they have banned words, the most dangerous weapon of all.

We have been told that to survive we must avoid communicating, avoid words.  And so speech has also been banned.  The latest edict demands the cutting of vocal chords, rendering us mute.

But my parents secretly taught me to read and write without books or paper, tracing letters in the sand, words in stone.  They drew pictures for me with their words; pictures from a time long gone.  Today I see Monet and I imagine a tranquillity of water-lilies where I float peacefully, serene.

When I open my eyes again, I imprint the artist’s name on my mind knowing I will never be able to teach my own children as I was taught.  Tomorrow my vocal chords will be cut and I will no longer have a voice.

There are so few of us left now, it never ceases to amaze me how many ways man seeks to destroy himself – even when extinction is staring him in the face.  We cannot help ourselves.

If only we had known the right words, we could have been saved.

My Tweets
Join 3,662 other subscribers