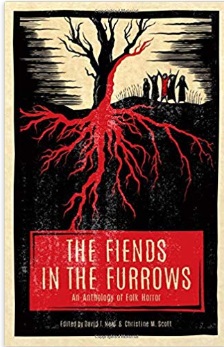 There seems to be a resurgence in this type of horror and when I wrote my short story The Way of the Mother (pub. Nosetouch Press’ The Fiends in the Furrows anthology), I hoped that people wouldn’t think I was jumping on any bandwagon. To this end, I did a trawl of my previous shorts and found a number of them were actually ‘folk horror’ without me even considering the label. Rural life had, and still does, exert an influence over me.

Those years I lived in the middle of nowhere in rural Shropshire have left their mark. In fact Th 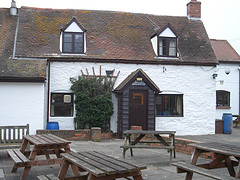 e Way of the Mother evolved from a world created in a short story I had published a few years ago so, no, I’m not jumping on any bandwagon – I just happened to be wandering along folk horror’s dark path already. Past stories of mine such as The Yowling, We Walk in the Night as Strangers, Domnuill-Dhu amongst others follow this track. (Pictured left is my childhood home, The Cider House, a pub in the middle of nowhere.)

I’ve seen some good reviews for Fiends lately and have been really pleased with some comments about The Way of the Mother. From The Maelstrom, a men’s online lifestyle magazine, I got this:

‘And The Way of the Mother by Stephanie Ellis is classic folk horror at its very oddest with its toe-curling rituals and powerful god monster.’

Whilst on amazon ‘he Way of the Mother by Stephanie Ellis was horrifying’.

This brings me on to NaNoWriMo and whilst I want to write a follow up to The Five Turns of the Wheel (currently out on beta read) at some point, I intend to use the month to come up with something new – but still folk horror. So here are the details of the new novel which you’ll also find posted up at NaNoWriMo (I am Stevie64). Whether the story meanders from this is yet to be seen as being a complete pantser, this initial idea is as much of plan as you’re going to get!

Miriam is one of four Outlyers in the village of Wootton. These women inhabit dwellings on the edge of the village at the four cardinal points. The strange powers of these women allow them to protect Wootton and its ways. Apart from Miriam, the other 3 Outlyers have all married and each has a child to continue their role. Miriam however, has taken note of life in the village and turned her back on its ways, refusing to either marry or have a child. This angers the elders and one day she is found dead by the nearby river with her stomach filled with stones.

The elders seek to appoint a new Outlyer in her place but the doors of Miriam’s house refuse to admit anyone, until Abigail, a distant relative and a descendent of a branch of Miriam’s family which escaped Wootton many centuries ago, is discovered. Abigail puts a dead-end job and disastrous marriage behind her to take on her inheritance, knowing nothing of the background of her deceased benefactor.

Soon the walls of the cottage start to whisper its stories to her and she discovers a charm, hidden by Miriam. This charm reveals Abigail’s inherited, but buried, powers. As she comes to terms with Miriam, and Wootton’s, history, hints as to marriage and motherhood become more and more overt, even aggressive. Without the bloodline continuing in the homes of the Outlyers, the villagers’ way of life will disintegrate and they will be forced to join the modern world – or so she is told.

But by the end, Abigail is forced to consider whether the powers of the Outlyers are real or if they are just imagined – and if imagined, is she mad?