It’s still early in 2020 and I’ve been living the writer’s life of write, submit, get rejected, resubmit and on and on. It’s the usual swings and roundabouts which, although you might not like it, is part of our chosen profession. As a generally glass half-full kind of person, this little round up is my own personal silver lining.

From Silver Shamrock Publishing comes my gothic novella, Bottled. It’s been exciting to see so many people reading this book and taking the time to rate and/or review it. If you want to join in, it’s currently part of goodreads Horror Aficionados group read for February. I’m answering questions over there if you want to throw anything my way. I also did quite an in-depth interview here.

‘A noirish tale of modern-day gothic horror with a surreal, dreamy, nightmarish atmosphere.’ – award-winning author of Perfect Little Stitches and Other Stories

The house was his, an unwanted and unwelcome inheritance. As a child, Tyler Vitrum spent many miserable hours beneath its roof, hating his grandfather and the man’s housekeeper, Mrs. Waites. His only escape during those visits had been via the impossible bottles created by his granddad; bottles holding miniature worlds in which he could lose himself for hours. Sometimes however, he sensed something else living in the house and in the bottles and when he returned home, he took the nightmares with him.Now an adult, Tyler decides one last visit can do no harm, allow him to finally shake off his nightmares. The bottles however, are waiting—and so is Mrs. Waites. As both house and bottles gradually yield up their secrets, it is made clear to Tyler what is expected of him and what will happen should he fail.Is Tyler master or servant of the house?

From Demain Publishing, comes the print copy of my gothic novelette, Asylum of Shadows. It’s been out for a little while in ebook format but now’s your chance to get it the old-fashioned (and to my mind, better) way.

‘Asylum of Shadows is truly a beautiful piece of horror fiction, with Ellis fully exploiting the inherent dread and horror to be found within a slum hospital, and particularly the grim, haunting atmosphere of a room where ensuring the dead stay dead is the only, final duty. ‘ – scifiandfantasyreviewer. 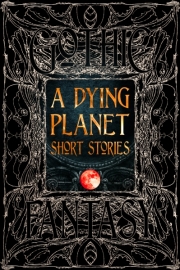 And finally, A Dying Planet, just released by Flame Tree Press, contains something a little shorter and a change from the gothic. My story, ‘Milking Time’, is set in a post-apocalyptic future, where nursing mothers become a commodity to be used – and abused.

Synopsis: ‘Resources running low, the population exploding, the planet is in danger: are we masters of our own destruction, or have we been invaded by aliens bent on mass extinction? Is this a pattern across the entire universe, or just our small sector of cosmic life? This new title in our successful Gothic Fantasy Short Stories series features stories exploring the themes of a dying planet, written by a fabulous mix of classic and brand new writing, with contemporary authors from all over the world.’

Silver Shamrock’s Midnight in the Pentagram anthology contains my short story, ‘Family Reunion’. A satanic re-telling of Euripides’ The Bacchae.

I’m honoured and amazed to be included amongst authors such as Brian Keene, Todd Keisling, Chad Lutzke and Shannon Felton amongst others. 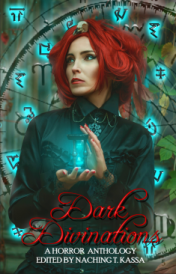 From HorrorAddicts, comes Dark Divinations, a gothic anthology featuring my story ‘Romany Rose’. I bring you fortune-telling with a painful twist.