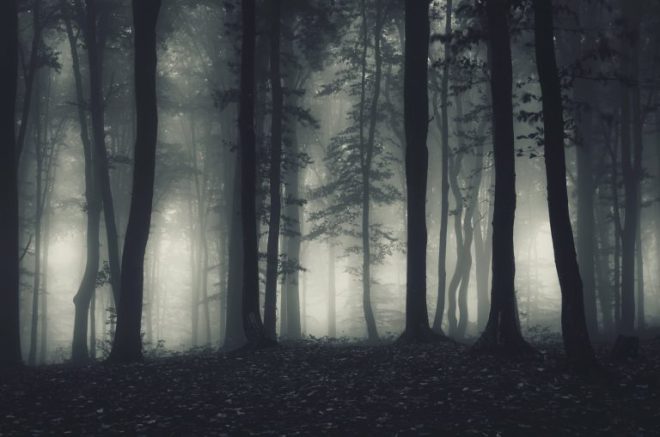 This was my entry for this year’s Flash Monster competition at The Molotov Cocktail. It didn’t get anywhere but I enjoyed writing it (congratulations to all placings by the way). It features Betty, who originally appeared in my short story The Dance and is set in the world of my latest WIP and also that featured in The Way of the Mother (Nosetouch Press, The Fiends in the Furrows anthology). I have a soft spot for this particular monster, perhaps one day I just might write his biography.

A New Dress for Betty

It was time for a new dress. Betty discarded his fire-blazed velvet—after all the Dance was done—and stood in the centre of the clearing. His brother stepped forward and laid the swords at his feet.

“You can cut new cloth with these,” said Tommy.

Shadows began to flicker across his body as the sun shrank back, muted colours to become a displeasing palette. Every village demanded a unique performance and Betty had to dress the part to become the Maid. He stepped into the knife-formed pentagram, surveyed each blade. They all looked the same but he knew each sang a different song. The one which sang soft velvet was silent. It knew it would not be chosen. Four remained. Which one? Wool, leather, cotton … silk?

Silk. Soft, sensuous. The blade rippled in the smudged moonlight. Betty smiled. Silk. He picked up the sword and looked at Tommy. His brother pulled out the dice on which were carved the names of the villages of the Weald and tossed it into the air, landing at Betty’s feet. Cropsoe, the hub, the centre of the Wheel.

Betty threw back his head and howled. Shaggy-maned and his body matted with thick hair, you might have thought him a wolf. Step closer and gaze up into the giant’s eyes, into his razor-filled mouth and you would see you were wrong. He was more, much more.

His other brother, the third of this Otherworld triumvirate, pulled out his violin and started to bow the strings. Sent notes of steel into the air, perfumed them with blood. Fiddler’s music would dance with Betty that night.

Betty ran lightly through the forest, watched by the hidden. Out into the open now, travelling the path between the two worlds, the seen and the unseen, stepping off it and into the slumbering village. Cropsoe. Silk. He sniffed the air. Silk meant youth, not the leather of the Crone, the wool of adolescence.

Fiddler’s notes continued to spin around him before leaping towards a small cottage on the village bounds. Here was silk. Twenty-one years. The coming of age. He tapped the door with the tip of his blade. The lights turned on quickly, the man who answered understanding immediately what Betty had come for.

“Take me,” he begged. “To lose another son would kill his mother.”

Sorrowfully, Betty shook his head. “Your first born honoured the Mother at the Dance. Now you have been chosen again. A double honour.”

His wife and son appeared behind him, the young man, rigid with terror. Hunters weapons hung on the wall, a rifle on a table, yet none made a move towards them. None disobeyed those who acted in the name of the Mother. The Weald had always fed her and her son, Hweol, Lord of Umbra, the Otherworld.

Betty reached out and put his arm around the youth, pulled him out of the house. “I thank you for your gift,” he said, bowing as he did so to the distraught and helpless parents.

Others had woken, peeped out from darkened windows but they too did not, could not, help.

Betty led the youth to the Dressing Meadow where Fiddler sat, now playing a different tune.

“You will feel no pain,” said Betty as the music drifted over them, sedating the lad, dimming awareness.

As he swayed, as if in time to the melody, Betty lifted his sword and started to prise flesh from tissue, away from muscle, separate from bone. His giant’s hands were delicate in their touch, each sheet of flesh carefully draped over the low branches of a nearby tree.

“Now ribbon,” he said, once the flaying was complete, and proceeded to prise out delicate crimson veins which he immediately laced into his beard and plaited into his hair. His victim looked on unseeing, had passed unaware from life into death, a blessing only some were given by Betty. He picked up his cloth and surveyed it thoughtfully. Beautiful silk but not quite enough.

Betty looked up at the moon and nodded. He had enough time. By daybreak, Betty’s arms were full of silk, the rising sun dappling its surface.

“Pretty,” said Betty, as he draped it over himself and twirled amongst the cornflowers and daisies.

Fiddler’s melody had changed its cloth, its notes, become lilac and rose, led the satisfied brothers back to their Umbran home.

In Cropsoe, families sighed in relief that they had not been chosen. But there was always next time …

One thought on “A New Dress for Betty”

My Tweets
Join 3,111 other followers